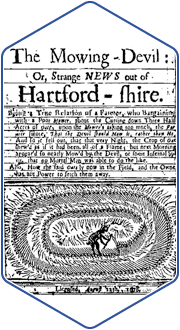 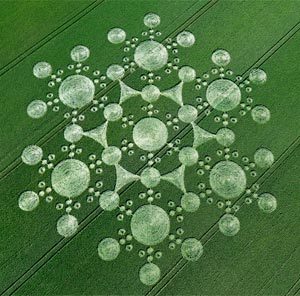 But enough about that. I offer no explanation of crop circles. I find the whole issue very murky. There is something undeniably tacky about the whole phenomenon—even at its most mysterious and inexplicable, I have a hard time taking it seriously. It certainly fits the pattern of activity one would expect from "pranksters" (whether professional, amateur, military, etc.): the evolving complexity over time, the extremely narrow geographical focus, occasional obvious errors, et cetera. But there is still something extremely strange about the whole situation, and I believe it is worth looking at very carefully.

For those of you, like myself until relatively recently, who have dismissed crop circles entirely since those two guys came forward claiming to have made them all back in '91, I urge you to look into the matter more closely. This was not a plausible explanation for "all" British crop circles, even back in 1991, and it certainly isn't now. To this day, the authorship of relatively few crop circles is ever established, and nobody has ever been caught covertly making a legitimate-looking crop circle. (There are, conversely, several videos of orbs of light and shit that have never been fully debunked, but which could presumably be faked as easily as any video these days.) Additionally, there are the magnetic anomalies, the bent nodes, and so on, which simply cannot be explained by this plank-flattening model.

Still, I could go either way on them. Obviously the idea of some weird Gaian forces spontaneously imprinting hexagonal designs onto the landscape of my ancestral homeland appeals to me, and I try to remain acutely aware of the fact that it might appeal to me a bit too much.

And I will say that, despite my natural attraction to such ideas (I like self-organizing systems), the "emergent planetary intelligence" theories don't hold quite as much water as they used to for me. There is something distinctly machined and technological about crop circles that is hard to ignore. Maybe that does add weight to the extraterrestrial school of thought, I'm not sure. To the extent that I consider any sort of explanation plausible though, I am leaning more and more towards thinking it is some sort of exotic human-crafted technology. Maybe military—though that has a certain tinfoil-hat quality to it as well, obviously. As far as I'm concerned, there could just be one guy in Britain who invented some machine that does this like thirty years ago, and he's just been flying around messing with people since then. 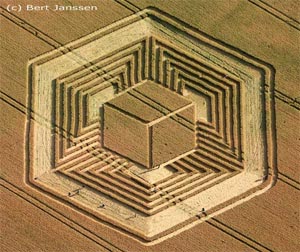 ANYWAY: the striking thing about the 2010 crop circle season—and why I feel compelled to write about it here—is the conspicuous return to pure geometric forms, and hexagonal forms in particular, after some years of what I would consider decadent naturalistic formations.

I don't actually follow crop circles that closely, so I may be conflating the last several years in contrasting them with this year's formations, but there has definitely been an inordinate number of very strong hexagonally-themed formations this year. Even a cursory look through any of the various online libraries of images from previous years will show the obvious increase in classic geometry this year—information-dense, radial patterns executed with high precision and mathematical coherence. And, though there has always been a strong hexagonal element to crop formations—that is largely why I find them interesting after all—I am having a hard time finding another year ever when there were as many overtly hexagonal ones as there have been this year.

But don't take my word for it. The following pages contain a variety of images of some of this year's hexaform crop circles:

Now, some people seem intent on characterizing several of this year's major hexagonal forms (Danbury, Cley Hill, and Fosbury) as "cubes." I strongly disagree with this assessment. In all cases these "cubes" are clearly contained within a hexagonal frame of some sort, and it seems to me more than anything else they are emphasizing the unity of all hexatopic forms—they perhaps represent cubes as much as they represent hexagons, but the underlying point is that they are both six-sided forms, and both reflect the descent of the hexad into the material realm, bringing with it the hexagonal wisdom of the universe. Or what have you.

Conversely, of course—if we are to entertain the industry-driven hoax school of thoughy—it could be that these geometric designs make better photographs, and the return to such formation simply reflects a market demand for that style. Who knows. 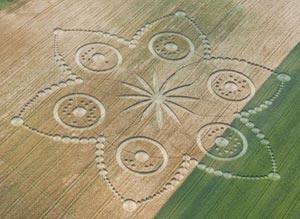 A curiosity worth remarking on is the usage of ASCII characters in at least two of this year's formations, encoding well-known mathematical formulae. One, the above-linked hexaform from Poirinio, Italy, uses decimal (ew!) representation to spell out "E=MC^2" in ASCII. While I find the circle itself amazing, and very well done—at least from the air—I have to say this particular expression makes me roll my eyes at this point. I mean, really? Of all the profound mathematical messages you could embed in a crop formation, they use the most clichéd, overused, and played out equation from the last century? IN DECIMAL ASCII? Yes, it could be some transcendent intelligence communicating "in a way we will understand," &c., but to be honest that seems like a bit of a stretch to me.

The other one, from Wilton Windmill, 22 May, features a much more agreeable binary representation of Euler's Identity, or some variation on it. Now, Euler's Identity properly spelled out ASCII-wise would be (if we are to spell out π, as they did): "e^((i)pi)+1=0". What they actually spelled out was: "e^(hi)pi)1=0". Now, various possibilities have been put forward for this, including most obviously that "hi" is just a pun on i, or perhaps even a pun involving Planck's constant, but it seems most likely that it was a simple typo, and they meant to include an open parenthesis instead of a lowercase h, since the two characters differ by only one binary digit. Why there is no plus sign before the 1 is also a mystery. 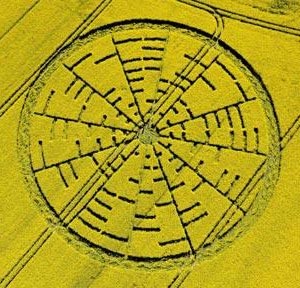 I respect the choice of Euler's Identity much more than the mass-energy equivalence, since it is probably the most amazing equation in known mathematics, and it doesn't get nearly the PR that E=MC2 does, but the various errors force me to conclude, of course, that this is indeed a poorly executed "fake." I think they are both "fake," actually. There are presumably far more interesting and subtle ways these equations (particularly the Euler one) could be encoded into an abstract geometrical design—resorting to crude ASCII characters seems to lack imagination. (No, crop circle people, I do not believe the typo was put there as a "cosmic intelligence test" for mankind. Sorry.) Of course, it could still be a typo made by military aircraft or the aforementioned guy who invented some weird crop-bending machine, but I think in these two cases at least I am willing to rule out the emergent-Gaian-intelligence hypothesis.

Both of these formations have a fundamentally hexagonal geometry—sixfold in the Italian one, twelvefold in the Euler one. I am unable to understand though, if the agency behind the Euler formation was trying to make it come out to twelve characters, why they didn't simply replace the secondary brackets with a multiplication sign, and add the addition sign before the 1, viz: "e^(i*pi)+1=0"—which is still exactly twelve characters, and has the advantage of being correct. It is indeed a mystery.

I guess I don't actually have that much more to say on the subject at the moment, though I would like to return to it again at some point. Though, as I've probably made pretty clear by now, it's a topic I have a great deal of ambivalence about. (For those interested in reading a more balanced and well-thought-out summary of the 2010 crop circle season, please read the aptly-named article The 2010 Crop Circle Season on Reality Sandwich.)

Furthermore, I would like to add that is entirely probable that at least several of the circles linked to in this article are, or will be found to be, "fake" in the course of time. I have not really investigated them as thoroughly as I could have. To this end, if you have any pertinent information on circles I have included here that would be of interest to the hexagonal community, or you wish to remark on them generally, please feel free to avail yourself of the comment section below.

In closing, let me just also add that, as a connoisseur of geometry in general, there are plenty of non-hexagonal crop circles that I find interesting as well. Indeed, as there is often a subtle hexagonality to things that are not overtly hexagonal, there could be very pertinent hexagon-related information being conveyed in many of these "non-hexagonal" formations. Most obviously perhaps, there have been a great number of vesica piscis patterns over the years, which are obviously intrinsically hexagonal, despite the lack of sixfold radial symmetry. But this is, after all, a blog about hexagons, and getting into the mathematical intricacies of particular formations is beyond the scope of this admittedly rather pointless post, so I will leave it to you, the interested reader, to investigate these matters for yourself.