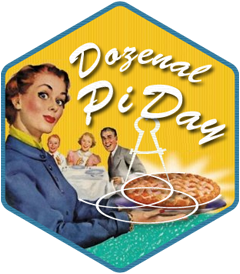 The way of the tau 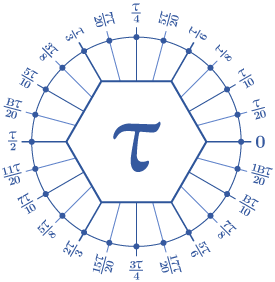 An astute reader recently brought to my attention the nascent movement afoot to replace π in common usage with the number now unfortunately known as 2π—viz., 6;349419 (dec. 6.283186):

(For a reasonably convincing argument on why the letter τ (tau) in particular should be adopted for this value, please read Mr. Hartl's manifesto.)

The fundamental point here is that, in trigonometry and all other manner of angle-measuring endeavors, what we care about is the radius of a circle, not its diameter. The one follows from the other to be sure, but at the end of the day the diameter is more usefully considered twice the radius than the radius is half the diameter. A circle is a circumference around a center—it is the measure of this distance between center and circumference that is elemental to the idea of a circle, not the rather incidental fact that its full width is twice that same distance.

This is a unit circle diagram using both dozenal notation (as with elsewhere on this site, using "A" and "B" for ten and eleven) and the newly proposed circle constant τ (tau), which is equal to 2π. The advantages of τ over π are numerous and obvious—instead of a full circle of arc being two of anything, it is just one τ. Put another way, τ is simply the number of radians in a circle. 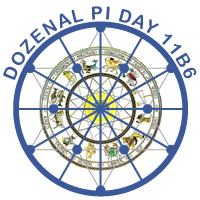