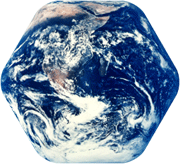 I do find it a bit curious though that Civ V has inspired all this talk about hexagons. This contest is by no means exceptional in that respect—the hexagonal news is full of reviews of Civ V, waxing geometric about the virtues of six-sidedness. I mean, on the one hand I'm glad hexagons finally getting the recognition they deserve, but at the same time, I'm not entirely sure why this one game was enough to spark such a frenzy of hexagonal activity. As I pointed out in my earlier blog post, Civilization and its Contents, Freeciv has had the option of hexagonal tiles for years, along with countless PC strategy games going back to the 80s, to say nothing of old RPG games, and they never seemed to lead to this level of hexagonal ferver in the popular imagination. I can only assume that Civ V simply came along at the right time to tap into some sort of deep hexagonal undercurrent in the collective hexagonal consciousness, perhaps presaging the arrival of some sort of hexagonal golden age on our planet.

Having carefully followed the hexagonal news over the course of this past year, it is evident that, for whatever reason, people are talking about hexagons more than they used to. And again, not just in a casual "it's a polygon with six sides" sort of way. People all over the world (or at least all over the internet), from all walks of life, seem very close to articulating the kind of ideas about hexagons that I've been talking about for years. I don't know if or when these ideas will finally manifest themselves in the popular discourse as directly as, say, they do on this site, but it certainly seems to be reaching some sort of tipping point. It will be interesting to see if this trend continues, or if it's just the transient effect of some idiosyncratic alignment of cultural and social factors. Or if I'm just imagining it entirely.