The following is a selection of links I have found pertinent to this event, though I find none of them particularly informative, and there doesn't seem to be a dedicated page that has been updated for this year's event. [Edit: the Hexagon Project page has now been updated for 2010.] [Edit 2013-10: this page is still being updated every year.]

Looking through some of the photographs, the one thing that stands out is how thoroughly the hexagon motif has been embraced by many artists. The designs aren't just made on hexagons, many of them incorporate very deep hexagonal geometries and symmetries, which is not the sort of aesthetic agenda I'm used to seeing advanced by our compulsory education system. One can only hope that children exposed to the hexagonal arts in such a direct and striking manner may grow up to be more hexagonally aware than previous generations, born under the yoke of quadrilateral hegemony. 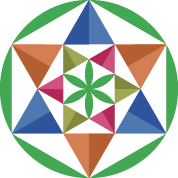 One question that has occurred to me: Was the use of hexagons influenced by the ubiquity of hex signs in Pennsylvania Dutch folk art? I already associate standalone hexagonal art with eastern Pennsylvania for this reason, so I find the geographical proximity here somewhat intriguing. I wonder if there might be at least some subtle cultural influence at work in this respect.

Anyway, it is a fascinating experiment in hexagonal consciousness-raising, and I'm glad to see hexagonal principles being advanced in such a straightforward fashion. But they don't seem to have any particularly up-to-date web presence, and what information there is seems largely targeted at local audiences. And I'm sure as crap not driving to Scranton for a school art project (though with a little more advanced warning I might have tried to combine it with some sort of Waffle House expedition/pilgrimage, since they can be found as far north as central PA). There seems to be a bit of a religious angle that I'm not sure I care for either. It does look interesting though, and I would very much like to see this sort of thing—the hexagon part anyway—franchised out to other parts of the country. So if anyone in the general area wants to check this out, and report back to me on its hexagonal implications, that would be amazing.

As chair of the International Interdependence Hexagon Project - and, by the way, very intensely involved in it at the moment, since it opens on Friday of this week - I must say that I am impressed by your interest and by the very fact that your site exists! We are NOT connected to any PA Dutch Hex signs. Northeastern PA is a very multicultural area - having been settled by miners, textile and steel workers from Italy, Wales, Ireland,Germany and Eastern Europe in the late 19h and early 20th Century.. .Recently having immigrants from Southeast Asia, India, Bhutan and Mexico. The hexagon I have found, is a most intriguing polygon. I taught art in an "open-space" elementary school who's architecture was comprised of seven hexagons in a flower shape and several others connected to it. My art room was a half-hex; i.e. a trapezoid. Upon retirement, I became involved in the Interdependence Day Celebration -celebrating the need for awareness of all people's interconnectedness and the practice of a "Culture of Interdependence.". The hexagon IS a metaphor for interconnectedness - so I developed the Hexagon Project as a vehicle for investigating these concepts by young people utilizing something graphic and tangible - the hexagon... It IS international -and I'd like it to be moreso! We DO have a website: www.interdependencedaynepa.org. You will find all kinds of examples of our project there. We have had student work from United Kingdom, Canada,Nepal [ very faithful participants], Africa, Haiti and at least 10 states across our country. We just send out a template with instructions - and ask teachers to involve their students thinking about connections - according to their developmental levels and personal interests. There is a book to read about Interdependence and a bibliography. Students are encouraged to do research in order to develop in-depth ideas about issues that exist in the world: human rights, civil rights, democracy, environmental issues. We have over 400 hexagons from two continents and four countries this year. I would like to have 4000 to "paper" the gallery some year! All hexagons connecting, all these ideas and expressions just pulsating in their hexagonal presence! WOW! Right now,, however, the 400 look pretty good. In addition we have created two 5 foot hexagonal murals- one on the wall and one horizontal to it. It will contain hexagons created by US students and Haitian students in an interchange of compassion between these two groups. we will also have a Haitian kite-making workshop at the opening and, guess what! - the are made with three crossed sticks tied together with strings and covered with then plastic grocery bags stretched across the points of the sticks - the very poor child's toy - a HEXAGON!!!!...Donations will be solicited for a project in Haiti. It goes on and on! We have an article about the Project in School Arts magazine August issue [DavisPub].

Now I must get some sleep in my rectangular bed! Hope to hear more in the future! I feel like I've come to a welcoming, familiar place. Thanks again for your interest - although I am in no way a mathematician!

Thank you for your reply. I'm glad you found your way to this site. Few people understand my enthusiasm for hexagons, and it is always a pleasure to run into those that do.

I did link to that page—or rather, the hexagon project subpage—in the original post, but it hadn't been updated for 2010 when I last saw it. I will edit it to reflect the change.

You seem to have a lot of ideas about hexagons that mesh well with my own—are there any like essay-length writings about this project that I might be able to add to my library or anything? (For that matter, what is the copyright status of your image galleries?) The whole artistic/aesthetic angle is a very important component of my hexagonal ideas, and one that I feel is underrepresented at this point on this site (though I plan to improve that in the future, as things get moving along here). Indeed, if any of my ideas about hexagons ever catch on, it will probably be in the form of some sort of art movement or something. So your whole project is right up my alley—again, not just because it uses hexagons, but because you all seem to have a demonstrable enthusiasm that reflects my own feelings on the matter, and which I can easily imagine translating into a broader movement of some sort. Do you have a mailing list or something? I would very much like to be kept informed of your future activities and goings-on.

Anyway, I made this site to provide some sort of communal focal point for those who have an interest in hexagons—whether to the weird extent I do or not—so feel free to conribute to the forum and whatnot. As you may or may not have noticed, I launched this like a month ago, so things are rather sparse, but I am hoping over time to build up a respectable operation here. There are, again, very few people in the world who seem to have any real enthusiasm for hexagons qua hexagons, but they do exist, and I have run into them over the years, and if we could somehow join together into some sort of vanguard hexagonal movement, I think that would be amazing.

I have also added a link to your project page on my links page.